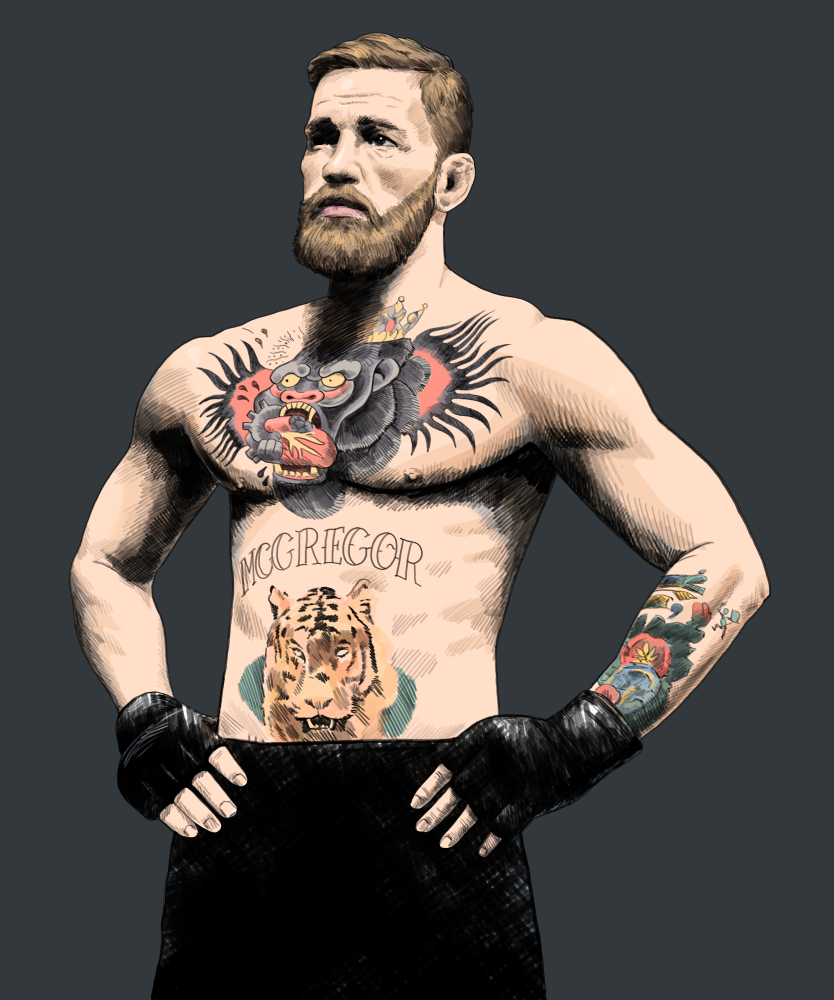 In light of Conor McGregor’s recent loss to Khabib Nurmagomedov and the fact that the loss was pretty emphatic, the big question out there among hardcore fans, vloggers, and the MMA media seems to be: What is next for Conor McGregor?  There have been a lot of possible matchups proposed:  An immediate rematch with Khabib, Nate Diaz #3, Justin Gaethje, Dustin Poirier and––who could forget––Anderson Silva.  There have definitely been other potential matchups proposed, such as Tyron Woodley at welterweight, and Georges Saint-Pierre at lightweight (or a new 165lb division), but I will stick with what I believe are the most likely opponents and discuss the possible merits of each.

Had Conor beaten Khabib, I would most-definitely be leaning towards Georges Saint-Pierre as the prime candidate for his next fight.  After all, that pairing would have promise to be the biggest superfight the sport of mixed martial arts has ever seen.  However, with McGregor coming off a loss, the matchup loses a lot of its shine––not to mention its appeal––to GSP.  Georges has stated numerous times that it is a legacy fight, or big challenge that would likely lure him back to the octagon.  Part of the allure would certainly be a title in a 3rd weight division, such as Lightweight or a potential 165lb belt.   I don’t doubt that GSP will be back to fight in the octagon again, but I think the likely matchups would either be a fight at a new 165lb division for a belt against either Khabib, or possibly Ben Askren. Considering that I think GSP is off the table for Conor, and Anderson Silva would make no sense (for reasons I will address another time), here is what I think about the other potential fights for Conor McGregor.

Immediate Rematch vs. Khabib “The Eagle” Nurmagomedov:  Had their fight at UFC 229 been closer I would say that the rematch would be a no-brainer, but since it was basically a one-sided fight, which ended without much resistance from Conor.  I feel that this fight is unlikely and highly undesirable.  Now, to be clear, Conor McGregor has been the golden boy who can do no wrong in the eyes of the UFC brass, so I can’t fully rule out the possibility of an immediate rematch.  However, ultimately my feeling is that there would be limited public interest in an immediate rematch, so I am not holding my breath for this one (nor am I interested).

Dustin “The Diamond” Poirier:  This fight has potential and has somewhat of a story-line to it.  True, McGregor dominated Poirier in their fight in the 145lb division, but that was a different Dustin Poirier, and not the one that has been on a tear in the Lightweight division––arguably a five fight win streak.  In my opinion, this would be a stellar matchup: two strikers who would go out there and throw hands, looking for the KO.  I think Poirier wants another crack at McGregor, to avenge his loss, and I believe this fight would be epic because of that.  The one drawback here is that Poirier––despite his top-shelf skills––is not a household name, like a GSP or a Nate Diaz.

Justin “The Highlight” Gaethje:  Here is another matchup that would undoubtedly provide fans with fireworks.  Justin Gaethje is a brawler and despite being a legit, division-one wrestling pedigree, he would most likely keep the fight standing and bang with McGregor, probably to his own detriment.  I’d pay to see this fight, but I’m not sure Gaethje has the cache just yet to secure a McGregor fight, though I believe this fight would do well on PPV if promoted properly.  After all, chances are that fans would see a knockout in this fight.

Tyron “The Chosen One” Woodley:  This fight could be the most unlikely matchup of all: even more unlikely than Anderson Silva.  Woodley is a beast of a welterweight, had dynamite in his right hand, and is an All-American wrestler.  This would be a foolish fight for McGregor to take right now (or anytime in the near future).  Woodley has explosive power and could easily take down McGregor if he wanted to.  Plus, frankly, I don’t think McGregor’s power would be affective against a true welterweight like Tyron Woodley.  I say no-go on this one.

Anderson “The Spider” Silva:  To me, this matchup makes no sense.  Why Conor McGregor called out Anderson Silva is a mystery to me and I don’t see any upside for him.  Silva is not the draw he once was, he is too big for McGregor, and despite his age, I believe he would still out-strike McGregor easily.  This one is just ridiculous to me, but hey, so was Conor fighting Floyd Mayweather.

Rematch with Floyd “Money” Mayweather:  We know Floyd will NOT be coming to an octagon near you anytime soon, so the only chance here would be in the squared-circle.  However, with Conor losing some of his shine, I’m not sure this fight would generate the kind of public interest that their first fight did.  Especially if one considers that Floyd finished Conor in their first fight.

A Boxing Match with Paulie Malignaggi:  With Paulie mercilessly trashing Conor after his loss to Khabib, and their sparring history, I’d say this potential fight has legs and could very well happen in the future.  These guys have heat but I don’t see this matchup being Conor’s next fight.

Tony “El Cucuy” Ferguson:  Some have mentioned Tony Ferguson as a next fight for Conor, but I don’t see it.  Tony is a dangerous matchup for anyone and he doesn’t have the belt.  I doubt he has what it takes to be a good choice for Conor’s next fight.  Besides, the grumbling from the hardcore fans, and Dana White himself, point to the long-awaited fight between Tony and Khabib.  This is the fight I want to see the most. The matchup is the most interesting of any and could really go either way.  El Cucuy has the skills, mindset and cardio to be the one who takes Khabib’s 0.  MMA gods, please, this fight has to happen!

McGregor-Diaz #3: McGregor Diaz #3 is the fight I believe is the most likely next matchup for Conor McGregor.  This fight makes the most sense to me, and on multiple levels.  For starters, there is the need for a rubber match between these two, considering their last fight was highly competitive, action-packed, bloody––and of course––entertaining.  Then there is the potential fireworks that would be expected in the lead up to the fight, which by itself would be enough to get my PPV money.  Another factor to add to the plus column would be the fact the Nate Diaz is a good PPV draw, and a 3rd fight between him and Conor would not only be attractive to the fans, but to the UFC too.  The old adage rings true here, “If it makes dollars, it makes sense”, so for this reason I’m leaning towards McGregor-Diaz #3 as the fight I would like to see as Conor McGregor’s next fight, and again, the matchup I believe will happen.

iThere are no comments

Begin typing your search above and press return to search. Press Esc to cancel.